We’ve firmly been in “camp transitory” when it comes to inflation but nonetheless have also been very worried that inflation could be stickier than both the market and central bankers think. It was clear to us that supply disruption, particularly supply chains that interacted with China, as well as those reliant on semiconductors, could be an issue for some time.

Something that has also been on our radar is the response to climate change and how this creates huge short term challenges in keeping energy flowing, and the lights on, as we emerge from the pandemic. As a result, investment into fossil fuels is non-existent. If you google “fossil fuel investment”, you only get “fossil fuel DIVESTMENT” in the results! If we look at our own actions as investors – we do not invest in bonds issued by coal or oil companies for the bond funds we manage. This obviously goes for many other investors these days, as was aptly demonstrated this year by the inability of an investment grade coal mining services company to borrow in the bond market at a rate of 6%!

However and it’s a big however, in the short-term this provides the planet with an incredible challenge, because there’s a chasm in timing (hopefully measured in years, but possibly decades) between the wants and needs of the people, governments and investors in order to address climate change and the technological advancements and infrastructure needed to run our cars, heat our homes and provide energy to industry in a carbon neutral way. Elevated energy prices could well be here to stay given the current investment climate for fossil fuels.

Energy prices are rising around the world, from European gas… 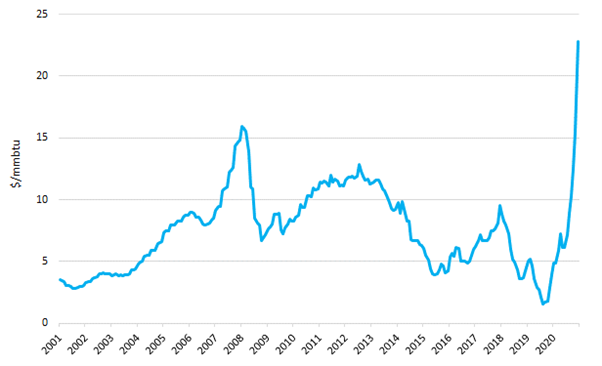 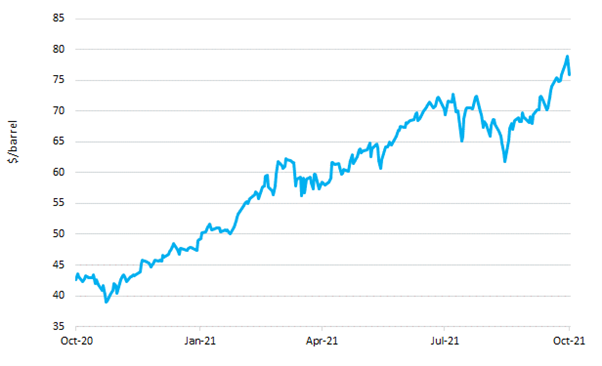 Like any good investor, we are always challenging our assumptions and through potentially structurally higher energy prices, “camp transitory” is being challenged. Elevated energy prices will only go to exacerbate and lengthen supply shortages. There is ongoing evidence of energy prices starting to bite such as the CO2 shortage, German factory shutdowns because the cost of energy has made producing goods uneconomical, and power rationing in certain areas of China forcing factories on to a two day week. We now need to ask ourselves if we are entering a phase of persistent supply disruption and the ramifications this has for markets. Indeed, markets are this week in the process of waking up to the possibility this could be the case, with higher prices having the potential to erode company margins and put a dampener on global growth.

Central banks will attempt to shift policy to address the supply demand imbalance but it isn’t going to be straightforward.

Since the 90s, central bankers have been highly adept at keeping markets happy by stoking demand with promises of plentiful cheap money. They’ve been aided in this regard by ever more efficient supply chains, plentiful cheap labour and benign energy markets which has helped them increase demand without stoking inflation. But we are now in the situation whereby a lack of demand isn’t the problem, it’s a lack of supply. In response to this central bankers can only seek to reduce demand, they cannot increase supply, so if growth slows as a result of high energy prices and ongoing supply disruption then applying stimulus at that point only serves to make the problem worse – it creates more demand which will stoke more inflation.

At this juncture, central bankers feel positive enough about their economies to attempt to decrease demand to meet supply by tapering bond purchases and increasing rates. Many emerging markets are well into this cycle, but developed markets are just getting started. However, once the US Fed starts they are likely to realise that financial markets will find this far too difficult to stomach. And if supply constraints cause slowing growth at the same time, they will reach for the central bank put once again and in the process stoke further inflation. Everyone then gets squeezed by lower real incomes.

A necessary adjustment to save the planet

If we are to rapidly adjust to a lower carbon world, then higher prices for fossil fuels will force through the necessary changes more quickly. The adjustment is clearly painful in the short-term, especially for those developing countries that are heavily reliant on hydrocarbons for power, such as India. Having said that there is a bright light at the end of tunnel, an energy nirvana, when the infrastructure is in place to capture and importantly store enough renewable energy. The end game is most definitely deflationary, with clean, cheap energy that doesn’t ruin the planet. But the path to nirvana is a going to be a bumpy one and will last for years if we are lucky and decades if we are not.

Commodity prices can fall and rise sharply depending on supply and demand, the economic background and financial market conditions. Exposure will never be direct to any commodity.

Climbing the Slope (of the Yield Curve)